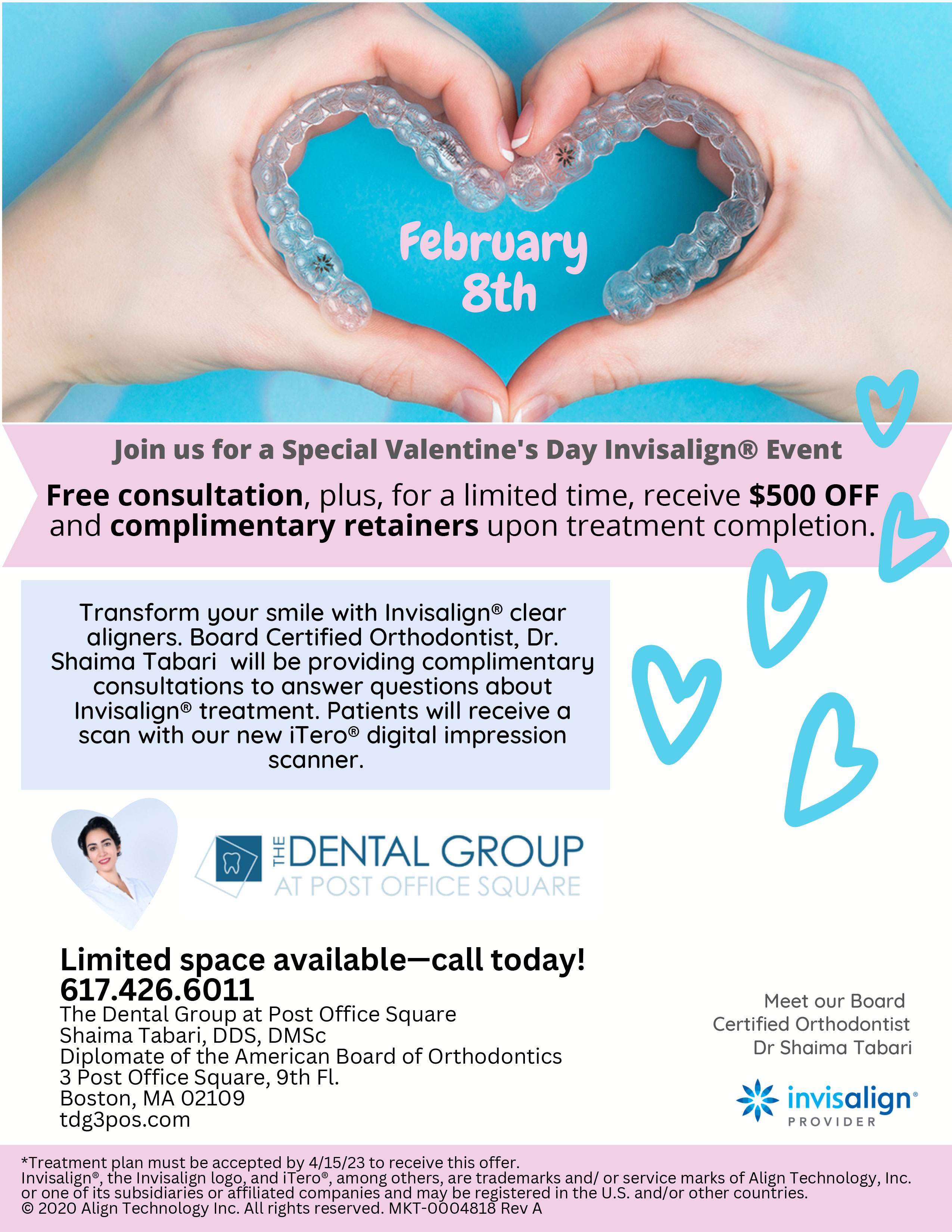 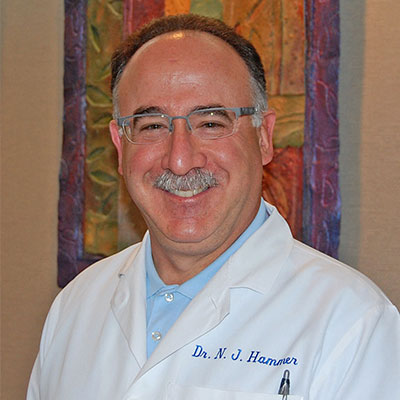 As a partner at the office, Dr. Hammer has maintained a clinical practice at The Dental Group at Post Office Square since 1990. Dr. Hammer received his dental degree from New York University in 1980. He completed a General Practice Residency followed by a two-year Prosthodontic Residency at the Veterans Administration Medical Center in Buffalo, NY.

Dr. Hammer is a member of the American Dental Association and the Massachusetts Dental Society. In addition, he is a member of the American College of Prosthodontists and a Fellow of the Greater New York Academy of Prosthodontics. Dr. Hammer has an extensive history in academic dentistry and has also lectured extensively in the United States and abroad. 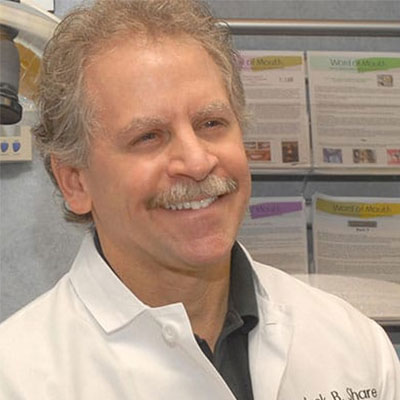 A native of rural Central New York, Dr. Share earned his Bachelor of Arts undergraduate degree in Biology with honors from Syracuse University in 1970. Receiving his Doctorate of Dental Surgery at the State University of New York at Buffalo School of Dental Medicine in 1974, he graduated with high honors and was duly elected to the prestigious Omicron Kappa Upsilon National Honor Society for his "academic achievements, scholarship and character in dentistry."

After graduation, Dr. Share completed a General Dental Practice Residency and General Anesthesia Internship at the Upstate Medical University in Syracuse to further advance his training in prosthetics and patient care.

Relocating to Boston, Dr. Share accepted a five-year, full-time academic appointment to the faculty of the Tufts University School of Dental Medicine as an Assistant Professor in the Department of Restorative Dentistry. In 1983, the doctor established a private practice in Boston's Financial District and, after 37 years, merged his practice with The Dental Group at Post Office Square in 2021.

Throughout his career, Dr. Share has remained committed to excellence and has strived to provide patients with the highest quality of dental care. He has a deep respect for patients, and along with his amiable and nurturing nature and attention to every detail, is one of the most reputable and well-respected dentists in the greater Boston Area. He is a member of the American Dental Association and the Massachusetts Dental Society, in addition to the Geological Society of America, the Society of Vertebrate Paleontologists and the New York Paleontological Society. Dr. Share has been happily married for over 44 years and has two adult children. 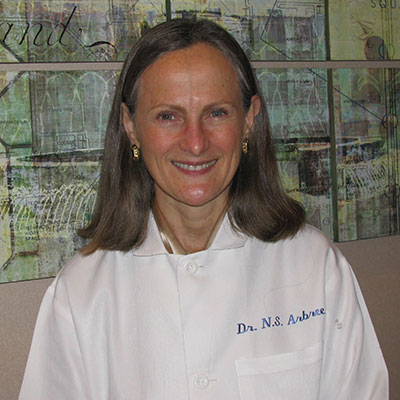 Dr. Arbree graduated from Georgetown University School of Dentistry and completed a General Practice Residency at the Veterans Administration in Gainesville, FL. She earned certificates in both Prosthodontics and Maxillofacial Prosthetics from Memorial Sloan-Kettering Cancer Center in New York City. Dr. Arbree received a Masters of Dental Science in Research from Tufts University School of Dental Medicine; her clinical research study was on the effect of implant-retained prostheses on geriatric nutrition.

Dr. Arbree has been with the Dental Group at Post Office Square since 1999, where she limits her practice to Prosthodontics. She and her team make a special effort to make patients comfortable, while achieving the best care they can receive, both conservative and advanced. 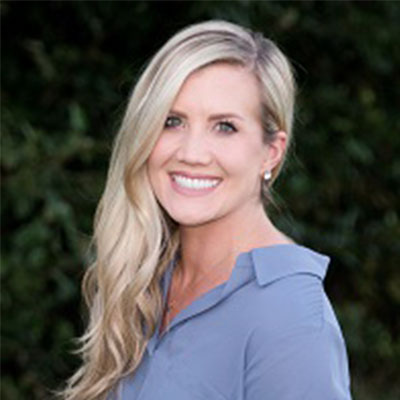 While in dental school, Dr. Gadeberg received a Navy scholarship as part of the Navy Health Professions Scholarship Program (HPSP) and served in the United States Navy after graduation. As Lieutenant at Camp Lejeune, NC, she honed her skills in a wide range of clinical disciplines, providing care to the military personnel there. Over the course of 4 years, Dr. Gadeberg treated over 7,000 Marines and Sailors. While at Camp Lejeune, she also earned the Navy and Marine Corps Achievement Medal, the Meritorious Unit Commendation Award, and the Navy Expert Marksmanship Medal.

Dr. Gadeberg is a member of the American Academy of General Dentistry, the American Dental Association and the Massachusetts Dental Society. She is enrolled in the American Academy of Implant Dentistry(AAID) MaxiCourse at Rutgers University and is working to achieve her fellowship with the AAID. She is trained in and has experience with state-of-the-art emerging dental technologies including CAD-CAM 3-D imaging and printing of ceramic restorations.

Dr. Gadeberg is happy to be living once again in New England and is excited to practice dentistry in Boston at the Dental Group at Post Office Square. In her spare time she loves to run, ski, hike and travel the world. 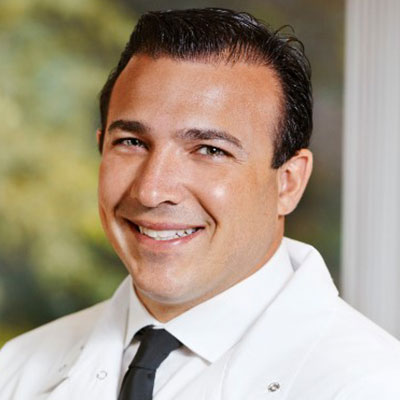 Dr. Govostes received his Bachelors of Science degree from the University of New Hampshire and then went to attend Tufts University School of Dental Medicine where he received his dental degree (DMD) and then later his specialty training in Periodontology. Dr. Govostes is a Board Certified Periodontist.

Dr. Govostes limits his clinical practice to the field of Periodontics which focuses on patient education as well as the preservation of teeth through various non-surgical and surgical therapy modalities in the treatment of gum diseases (periodontitis), as well as implant dentistry and the treatment of other oral pathologic conditions associated with the mouth. The various services offered but not limited to, are the: reduction of gingival pocketing, cosmetic correction of recession and reconstruction with various gum grafting techniques, removal of hopeless teeth, replacement of missing or hopeless teeth with dental implants, as well the augmentation of bone which is often times needed for future dental implant placement.

Dr. Govostes is a member of the American Academy of Periodontology, the Massachusetts Society of Periodontics, the Massachusetts Dental society, as well as a member of Delta Sigma Delta organization which is an International Dental Fraternity. Dr. Govostes has served the public by working in community dental clinics in Colorado as well as volunteering for Dental missions to Quito, Ecuador where he treated the underprivileged community. He also serves as a guest lecturer at the Yankee Dental Convention in Boston MA. Dr. Govostes concerns himself with his patient’s comfort, relaxation, and education as well as the quality of care he provides. 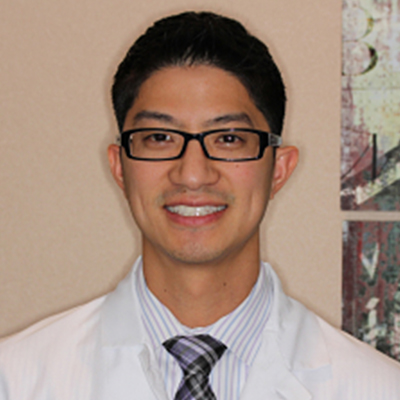 Dr. Shaima Tabari is an American Board of Orthodontics certified orthodontist who is part of The Dental Group at Post Office Square team. She is a dual trained orthodontist with experience working in the US and the UK. She completed her 4-year doctorate program in orthodontics from the Harvard School of Dental Medicine with her thesis focusing on Obstructive Sleep Apnea. Patients visit her for reasons such as Invisalign®, braces and follow-ups on a range of other orthodontic treatment procedures. Dr. Tabari strives to provide patients with a holistic individualized treatment plan which best complements and enhances their quality of life.

In addition to her excellent educational pedigree, she is an avid skier licensed in avalanche search and rescue operations. She also enjoys learning new languages and can so far speak English, French, Farsi, Arabic, Spanish and Icelandic. 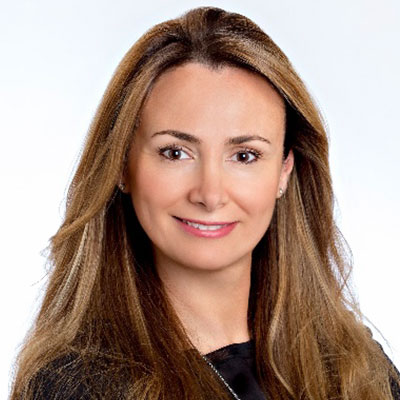 Dr. Papathanasiou earned her Doctor of Dental Medicine degree from Tufts University School of Dental Medicine and is the Director of Advanced Graduate Esthetics and Operative Dentistry in the Department of Prosthodontics. After graduating from the University of Athens Dental School in 1995, Dr. Papathanasiou accepted a full-time faculty position at Tufts in the Department of Prosthodontics and Operative Dentistry where she has been teaching and conducting research.

Dr. Papathanasiou has two children and when not working, she enjoys spending time with her family and friends, traveling and engaging in numerous sports.

This summer, our office will be hosting two Invisalign® Special Event Days during which our board-certified and Harvard trained Orthodontist, Dr. Shaima Tabari, will be providing free Invisalign® consultations for those who reserve a spot. Those who sign up not only receive a free consultation, but they will also receive $500 off of their treatment, as well as a free retainer upon treatment completion.

To schedule your free Invisalign® consultation with Dr. Tabari on either 7/13/22 or 7/27/22, please call or text our office today. Space is limited!

Welcome to The Dental Group at Post Office Square

The quality of comprehensive dental care improves when highly specialized, caring practitioners share their knowledge, skills, and resources in a group setting. At The Dental Group at Post Office Square, our skilled doctors and staff utilize our experience, resources and our contemporary facility to create an effective, gentle and comfortable dental experience for individuals and families in the metropolitan Boston area.

We are committed to providing each patient that walks through our doors with the highest quality dental care experience, and our state-of-the-art facility employs the most modern equipment and techniques available in the dental profession. Give us a call today, we can't wait to help you begin your journey towards achieving great oral health!

The Dental Group at Post Office Square provides specialized dental care for patients of all ages. A description of some of our services and technologies can be found below.

Since this is not insurance, patients without dental benefits can opt to join the PremierOne Dental Plan. No pre-authorization of any kind is required. Furthermore, there are no maximums or limitations on pre-existing conditions. Click here to learn more about this helpful option.

A Focus on Education

At The Dental Group At Post Office Square, all of our practitioners are affiliated with local institutions of higher education. Our team works together seamlessly and are often found consulting on each other's individual diagnoses and procedures. Our patients benefit from our knowledge of the best and newest dental advancements and we always take the time to educate our patients about their oral health and their available treatment options so they can be involved in choosing the best direction for their care.

Our staff of skilled doctors are able to fulfill patient needs in all aspects of dentistry. We are experienced in general dental services as well as specialized services from periodontal treatments and orthodontics to prosthodontics. Learn more about our amazing team of doctors below.

To schedule an appointment you may call our office at (617) 426-6011 or complete the appointment request form below. We will then contact you within one business day to confirm your appointment. If this is an emergency, or if you are trying to cancel or change an existing appointment, please call the office directly.